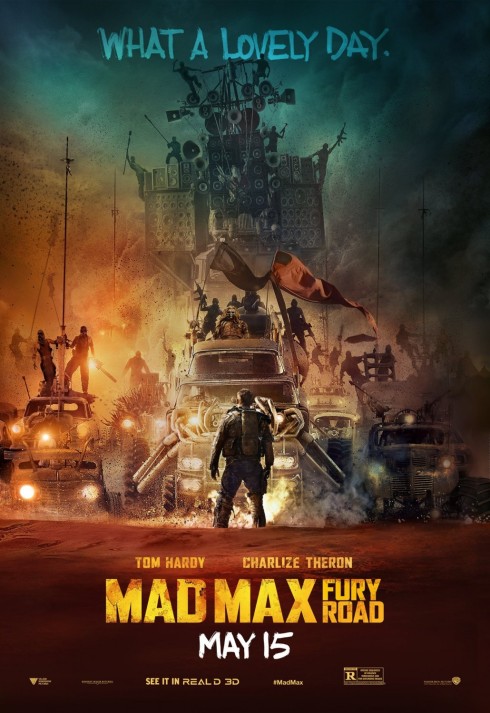 You need to see this film, and you need to see it on a big screen. It is a work of art. It is a spectacle of action. You will have heard, I assume, that this film is visually stunning. It is. The aesthetic of the world is as relentless as the action within. You need only watch the trailers, or see the posters, as the one above, to know what this film offers visually.
The plot is simple, but in the sense of being clear and direct within a limited framework. This is a good thing. The stakes are clear from early on, and the majority of the film concerns itself with the relentless action of the chase at its heart. Our (anti-)heroes have a clear goal, our villains are direct in their efforts to disrupt this.
It is balls-to-the-wall insane, and gloriously so.
If you have not yet seen the film, do not read on, there are spoilers everywhere below the jump. Go see it, then come back. Have fun. Hope you enjoy it as much as I did!

The first sense you get of this film being something special is in the sheer scale of it. Miller is willing, often, to dwarf the convoy-chase which is at the heart of the narrative with shots of such vast emptiness that the vehicles, let alone the people within, are mere specks.
But the film is one of competing scales. So much of it is over-the-top, dialed to 11, grandiose and epic. Yet within this, Miller positions his characters in cramped and crowded spaces: the tunnels of Immortan Joe’s citadel, the can of the war-rig, the hidden passages within. The War-rig is at once too big to stop, and too small to hold its cargo: Furiosa, Max, the wives, Nux, and later the Vuvalini. Miller zooms in on the small-scale for moments of character too. Max’s tragically premature thumbs-up, Furiosa’s concerned gaze, Nux’s transitional moment with one of the wives (I think Capable). When Furiosa realises that her dream of a return to the green place is impossible, she is alone in the sand, as is Max when he realises that he cannot yet make his own way while Furiosa remains unredeemed. 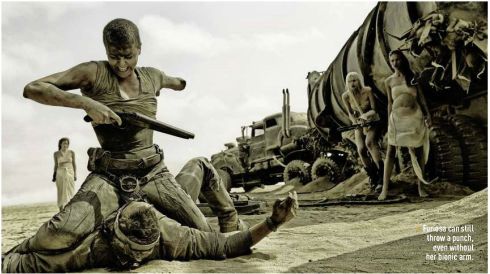 In short, I loved this film.

I loved it for the cars and the crashes, for the explosions, for the insane stunts and the sheer brutal reality of them.

I loved it for its epic sandstorm and fire tornadoes that could lift a car.

I loved the madness if it all, the doof warrior harnessed and blasting guitar riffs across the already blasted landscape.

I loved that it was a Mad Max film, like the final chase in Mad Max 2 (Road Warrior) dialed up and up until there was no scale for it to fit.
|

I loved that in one split second, in Max’s flashbacks, we saw Toecutter’s bulging eyes again, just as we did near the end if the first Mad Max in 1979. (and because Immortan Joe and The Toecutter were both Hugh Keays-Byrne)I loved that Furiosa stood at the end, eye swollen closed (in another wonderful nod to Mad Max 2: Road Warrior).

I loved the mad war-boys screaming ‘Witness!’ and plunging to suicidal glory.
I loved Charlize Theron kicking arse, and Megan Gale too – briefly.
I loved the biker gang of septuagenarian women who hoarded seeds but weren’t above killing for the right cause.
I loved the brutal hand-to-hand.

What didn’t I love?

Not much.
Hardy was kind of in and out. His accent was sometimes pseudo-Australian, other times not even nearly. At one point he delivered a line (I’m not sure which, in the cab of the war-rig about 3/4 through the film) where he seemed to be doing his Bane voice.
Furiosa made a miraculous recovery from a stab wound and a collapsed lung. Another stab cured her. And a blood transfusion. I guess her and Max were the same blood type? Or something?
(Edit: It has been pointed out to me that Max is established as a universal blood donor in the opening sequence by the tattoos Joe’s War-boys put on him. I must have missed that detail. Even my minor quibbles are invalid.)
I’m quibbling. No one cared about that. We forgive our films those details for the sake of an heroic closing image.

This entry was posted on Monday, May 18th, 2015 at 12:40 am and tagged with Bechdel test, Feminism, Films, George Miller, Mad Max, Review and posted in Reviews. You can follow any responses to this entry through the RSS 2.0 feed.
« ‘Enfolded’ in Aurealis #78
Mad Max and the Monomyth »