It’s pretty widely acknowledged that this year was not the best, for a great many reasons. For me there was a tragedy in my extended family near the start of the year, like the rest of you a cavalcade of deaths of celebrities I admired, the US election result, and then it ended with more bad news for good friends of mine.

So perhaps F-U 2016 is the best response. Good Riddance. 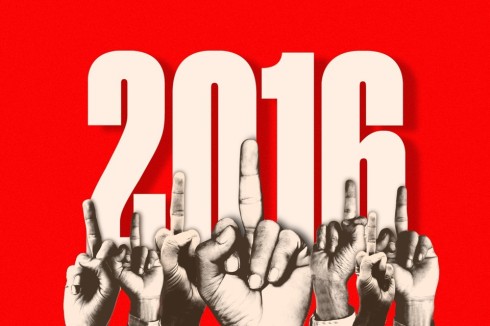 Which is not to say there were no positives (for pop-culture, the resurgence of Star Wars through both Force Awakens and Rogue One, and the return of Spidey to the MCU) but, yeah… not a year for the highlights reel.

As a writer, this year was a tough one. I had my first short published in 2014, in a tiny token-payment magazine which is now defunct. In 2015 I had a story in one of Australia’s most significant SFF magazines, and felt like I was making progress. In 2016, no shorts published. I did have a greater focus on novel writing between late 2015 and now, but there were a few short stories I put out there, without any of them getting published. Hit the second round on a few magazines, including one major Hugo-award-winning international magazine. I’m taking that as a sign of progress in the quality of what I’m putting out there, but near-misses are still misses.

Novel-wise, well, ups-and-downs. I started well, in February completing a manuscript of a sequel to my novel ‘Rakan’. That makes the third full-length novel manuscript I’ve written, and I’m definitely feeling the improvement in understanding the process and in getting the work done. I’ve had some success with ‘Rakan’, some full-requests and some great feedback on what it does well. Still querying and still waiting on some decisions, so that’s in a bit of a holding-pattern. Watch-this-space. After finishing the Rakan sequel and mapping out the third of the trilogy I have shifted focus, experimenting with several novel ideas without really committing to any until late in the year. Now I’m committed to ‘Biotropolis’, which is at about the 30,000 word mark and looking like it’ll get to somewhere between 70 and 80k.

As a reader, I’ve shifted through a few genres. The year started with a classic: ‘The Big Sleep‘, by Raymond Chandler, which helped me a great deal in understanding Crime Noir’s origins and the value of a tight, well-paced plot. ‘Road Brothers‘ is Mark Lawrence’s collection of short stories based on characters from his Broken Empire trilogy, and a good example of character-driven Fantasy (Grimdark?) shorts. ‘Aurora‘ by Kim Stanley Robinson was Hard SF, harder than I’d normally read but I really enjoyed his science, moreso than his characters. ‘Binti‘ by Nnedi Okorafor, was much different Sci=Fi, a sharp little novella full of ideas and alien images. I enjoyed the focus on communication, rather than conflict. 2016 was also a year where I read more YA, and Aussie YA at that. Jay Kristoff’s ‘Nevernight‘ was a Fantasy revenge tale of a young girl honed into a master assassin. The first of a trilogy, it was more violent and sexual than I’d expected from a YA novel. Also by Kristoff, co-authored with Amie Kaufman, ‘Illuminae’ was a highlight. A Sci-FI adventure narrative cobbled together from transcripts, emails, message boards and other non-standard narrative forms. I’m currently reading the sequel, ‘Gemina’ which is as good and features illustrations by Marie Lu. The release of ‘Gemina’ interrupted my reading of ‘Ninefox Gambit’ by Yoon Ha Lee, which had an intriguing start and which should be right up my alley, being space-opera with weird and mathematics mixed in. I’m looking forward to returning to once ‘Gemina’ is finished.

For short stories, I enjoyed Brooke Bolander’s harpy revenge story, ‘Our Talons Can Crush Galaxies‘, published in Uncanny, and Cassandra Khaw’s dark mermaid horror, ‘And In Our Daughters, We Find A Voice‘, published in The Dark Magazine.

In other media, the Star Wars films were a highlight, as I said. ‘Captain America: Civil War’ was also great (team Cap!). ‘Zootopia’ and ‘Finding Dory’ were good fun with the kids. ‘Jason Bourne’ was a disappointment. We don’t get many chances to go to the movies, and that was one wasted. We missed a few I want to see as well. I did discover the most excellent movies channel on YouTube: ‘Movies With Mikey’ which is amazing and wonderful.

On TV, I finally discovered Black Mirror, I enjoyed the crazy/horror/comedy/gorefest nostalgia of Ash Vs Evil Dead, and the Marvel TV Shows. Liked the Punisher storyline in Daredevil S2, but was less interested in the Elektra and ninjas and all the rest. Jessica Jones was great, but sometimes very difficult to watch. Luke Cage was stylish and cool and excellent while Cottonmouth was around, and spiraled hard toward a disappointing finale when he wasn’t. The Brazilian sci-fi 3% was pretty interesting, even through the bad dubbing. The Expanse started pretty well but for some reason failed to keep me hooked. Netflix has me watching more than I used to, but there’s still not a great deal of time for TV. Game of Thrones, always an exception.

I got stuck playing ‘Fallout 4′, in Survival Mode, slowly rebuilding the wasteland with comfortable beds and dining areas for all my multitudinous Minute-Men-loyal settlers. I got the remastered ‘Skyrim’ too, and sometimes I just go and walk by the lake I can see from the manor I built, just enjoying the way the water moves and fending off the occasional threat.

And what will 2017 bring? Who knows. There’s an unpredictable geo-politic at play and a sense that things will get tougher before they get better, (near-future sci-fi will be difficult to write, as the ridiculousness of our reality outpaces it), but there is no way out but through and the rewards will come to those who keep working for them. Persistence and progress. It can feel like a tough slog at times, and each hard-fought inch of forward motion can sap our energy, but ever-onward. Write the thing, submit the thing, write the next thing. Keep writing, keep submitting. Keep reading, keep learning.

My reading/writing goals for 2017:

All the best for 2017, you guys. Thanks for stopping by and reading, and thanks for giving me an audience while I shout out into the void.